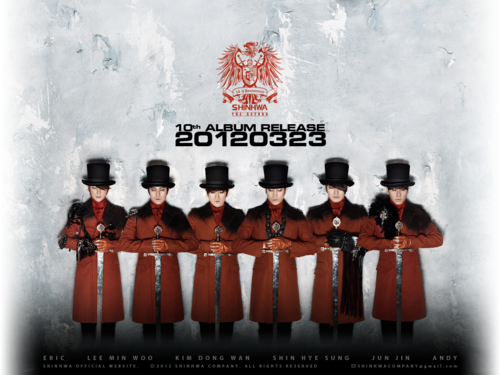 The second round of teaser photos for Shinhwa’s highly anticipated comeback has been released! This time it’s images for Jun Jin and Lee Min Woo.

As seen before, both Jun Jin and Min Woo are sporting the unified look of blood orange suits and black top hats. Although his unbalanced bangs reveal only one eye, Jun Jin still gives a piercing, intense gaze with his heavy smoky eyes. On the other hand, Min Woo does not look into the camera but it seems like he is blowing on a several studded and spiky bands. His pose and the angle of the picture shows off his sharp jawline. Again, both of the teaser pictures give fans another glimpse of Shinhwa’s modern day vampire concept.

Shinhwa’s 14th anniversary concert titled “The Return” will be held on March 24 and 25 at the Seoul Olympic Stadium. Their long awaited tenth album will be released on March 23.