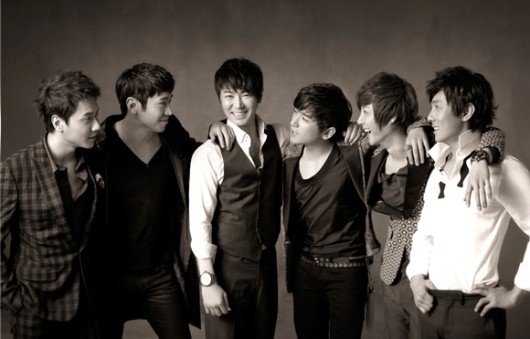 Shinhwa’s Back To Their Old Comedic Antics

On March 31st, member Min Woo uploaded onto the Shinhwa‘s official twitter a picture along with the words, “We are Shinhwa!”

The photo revealed the members posing in a variety of comedic fashion in the hallway.

Minwoo uploads a funny picture for the fans onto Shinhwa’s official twitter.

Leader, Eric, is laying face down on the ground, and members Jun Jin and Min Woo both use their hand(s) busting out in humorous squatting positions. Main vocalist, Shin Hye Sung, is leaning on one of his crutches as he lifts his injured leg and other crutch in the air, and Dong Wan is leaning against the wall with a rather embarrassed look on his face.

What makes this picture even more funny is that their youngest member, Andy, is seen in the very back, talking on the phone as if he is unfazed by the scene laid out before him.

The group Shinhwa is known for continually revealing their humorous and bizarre photos on their official websites and concerts for their fans. They are also considered one of the ‘original’ idols who started to let loose and let their wittiness shine on air.

Netizens who saw the picture quickly replied to their photo with comments like, “Their sense of humor hasn’t died down,” “Shinhwa hasn’t changed a bit,” “Now, even Shin Hye Sung is joining in,” “Long lived idol’s comedy instinct.”