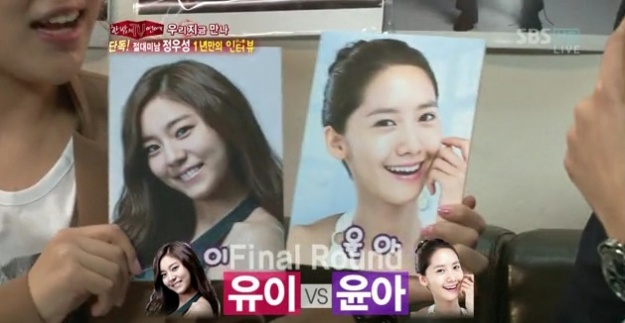 On April 4, Jung Woo Sung appeared on SBS “One Night of TV Entertainment” for an exclusive interview. During the interview, he was asked about his ideal type of girl group member in a new segment called, “Jung Woo Sung’s Girl Group Ideal Type World Cup.”

In the first round, he picked f(x)’s Krystal over Sulli, but in the following round, he chose After School’s Uee over Krystal. In the third round, it was Uee versus T-ara’s Jiyeon, but he went with the After School member again. The next match up was between Uee and miss A’s Suzy. But without a hesitation, Jung Woo Sung picked Uee, showing his commitment to her.

Next up was Girls’ Generation’s Yuri. This time, it took some time to decide as he mentioned both are very attractive. But he ended up picking Uee again, bringing up the final matchup between Uee and Girls’ Generation’s YoonA. At that point, the star actor couldn’t take it more as he yelled, “Do I really have to pick only one person? No! No way!” He thought for a while, but eventually, he went with Uee again, proving his infatuation with the idol star best known for her “honey thighs.”

He said, “I saw her once on a TV drama, and I liked her regular girl image. She’s tall, too.” Later, he even sent her a video message saying, “Hi Uee, nice to meet you!”

Who would you have picked from those girl group members?