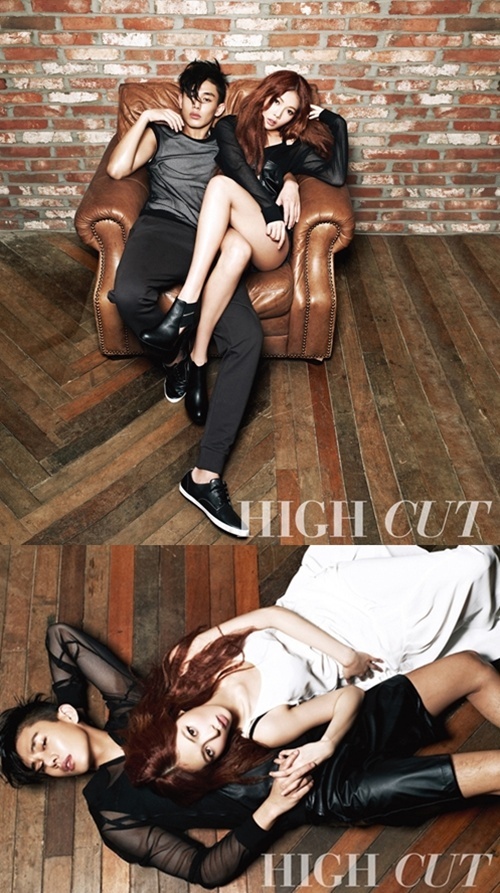 On April 5, Yoo Ah In and HyunA’s style magazine “High Cut” photo shoot was revealed. Yoo Ah In did not disappoint fans as his previous experiences in photo shoots helped him bring out professional model poses. HyunA also displayed a force with her sexy eyes.

Photographer Kim Young Joon—who lead the photo shoot—evaluated, “Both Yoo Ah In and HyunA’s poses are high quality and their understanding of the photo shoot helped make it effective.”

Yoo Ah In and HyunA are both students at Konkuk University in the College of Arts—with Yoo Ah In being the sunbae by one year. But this is their first time actually meeting face to face due to their busy schedules of acting and performing on stage.

Yoo Ah In stated, “Even though it is my first time meeting HyunA today, I listened to 4minute’s songs and watched their performances on a daily basis. I think I listened to their songs more than other girl groups’.”

HyunA said, “At first I was very shy. Usually when there is a couple photo shoot, the couple greets one another and talks for a bit before the shooting but the photographer just said, ‘Alright let’s begin’ and made me blush. Yoo Ah In would still look awesome if someone took a picture of him just walking along the streets. His force and aura is amazing; I liked the feeling of his vibe.”

4Minute
HyunA
photo shoot
Yoo Ah In
How does this article make you feel?