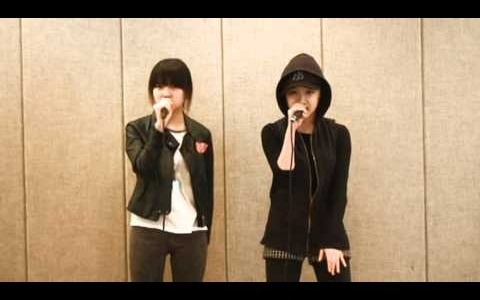 Following girl group 2NE1, YG Entertainment is planning on debuting a new girl group where Kim Eunbi and Euna Kim have been confirmed as members. A YG representative spoke with OSEN on April 7th confirming the news. A video clip of the two girls practicing has also been posted on YG Entertainment’s official blog.

On the afternoon of April 4th, YG Entertainment posted a video clip of Kim Eunbi and Euna Kim singing Sam Sparro‘s “Black & Gold.” Viewers got the opportunity to check out the girls’ skills and potential as members of the company’s new girl group. After viewing the clip, netizens noticed that the two girls seem more natural with the camera. They were able to demonstrate their powerful vocals and rapping skills with style. Many commented that the girls looked more relaxed and confident than they had during their previous auditions on television.

In addition, the girls are wearing comfortable clothes and holding their microphones with confidence as they perform. This clip was taken recently at YG Entertainment’s practice room. It is said that the girls are being recorded once a week so that their progress can be evaluated.

Being chosen as one of YG’s trainees is hard enough, but the real challenge begins once aspiring singers actually make it into the company as trainees. The entire music industry is aware of the challenging survival procedure YG trainees need to pass before they can debut as singers. This is especially difficult because President Yang himself directly evaluates the trainees and decides whether they can debut as a group or solo.

Other YG artists such as BIGBANG and 2NE1 also underwent and passed these difficult trainee years and were able to debut only after many years of hard work and practice. They are now among the top idol groups in the Korean music industry and are also spreading their music worldwide.

Kim Eunbi was already previously confirmed for the girl group and Euna Kim has now been added to the list as well. Because not a lot of news has been revealed to the public concerning the new girl group’s progress, the revealed video received a lot of interest from music fans.

Both girls were contestants on “Superstar K.” Kim Eunbi was a contestant in Season 2 while Euna Kim particpated in Season 3. Last year, Kim Eunbi received a lot of interest for her enhanced beauty after losing 8kg. Meanwhile, Euna Kim is known as “Female Jo Kwon” for her funny charms and wit that she had demonstrated on “Superstar K.”

This new girl group is also being called, “YG’s Girls’ Generation.”The girls are known to be natural beauties who have never received plastic surgery treatment of any kind. President Yang stated, “I started this group because I thought it would be interesting to see a group of pretty girls who can also sing hip hop music.”

You can check out the girls’ practice video clip here.