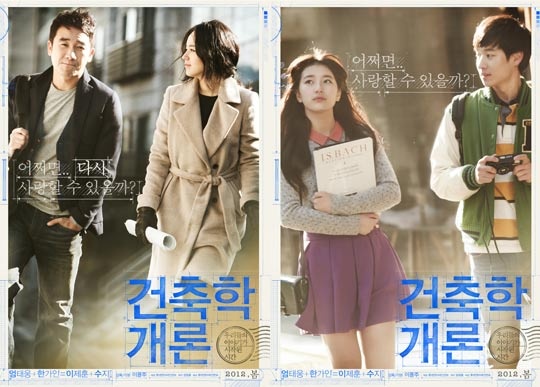 The film “Architecture 101” which stars miss A’s Suzy, Han Ga In, Uhm Tae Woong, and Lee Jae Hoon is maintaining its position as #1. The film has remained #1 on the Korean box office and this comes as a surprise because of blockbuster films that have been released recently.

According to KOFIC, (Korean Film Council) during the weekend of April 6-8 “Architecture 101” gathered 454,430 viewers which makes the aggregate total 2,332,698 viewers. The film is about first love between an architect student (Portrayed by Lee Jae Hoon) who alter becomes an architect. (Portrayed by Uhm Tae Woong) He is approached by his first love (Portrayed by Han Ga In) who asks him to keep his promise of building her home, and the two reminisce about their past. (Suzy portrays Han Ga In in the past)

The film gained interest because of Han Ga In’s appearance (who increased her popularity on “The Moon That Embraces the Sun” and because it was Suzy’s film debut.

Currently “The Hunger Games” is #2 on the Korean box office followed by “The Intouchable” then “Wrath of the Titans.”

Suzy
Han Ga In
miss A
How does this article make you feel?