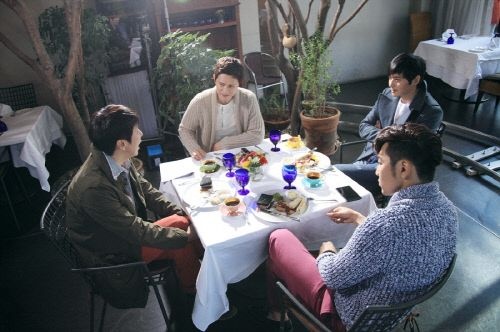 The first recording for SBS’ new drama, “Gentleman’s Dignity,” took place in Seoul on April 7. All four main characters of the show, including Jang Dong Gun, Kim Soo Ro, Kim Min Jong, and Lee Jong Hyuk, met at an upscale brunch restaurant in downtown Seoul, to kick off the recording of the show that’s been marked as Jang Dong Gun’s grand return to TV drama series.

According to people at the set, the four veteran actors showed tremendous chemistry during the entire filming session. Having worked in the industry for a long time together, the four male leads fully understood the script and setting, and their teamwork with the production crew was also off the chart, increasing the anticipation level for the show’s first episode.

“Jang Dong Gun, Kim Soo Ro, Kim Min Jong, and Lee Jong Hyuk showed close friendship during the recording, and their chemistry was perfect throughout the whole filming session. The energy levels of all four actors are incredible so you can expect to see a great show. Please continue to show support for this upcoming, ‘high class’ romantic comedy show,” the production crew was quoted as saying.

The first episode of “Gentleman’s Dignity” will air on May 26. The main casting includes Jang Dong Gun, Kim Ha Nuel, Kim Min Jong, Kim Soo Ro, and Lee Jong Hyun, making it one of the most highly anticipated dramas of the year.