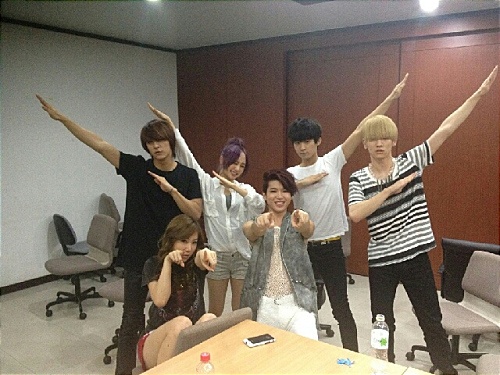 On April 8, SHINee’s Key posted a group photo with his fellow “91-line” idol stars on SHINee’s official me2day page. With the caption that read, “The ’91-Line’ got together for the first time in a while in Thailand! I guess a few people are missing,” Key shared a photo taken with Kara’s Nicole, SISTAR’s Soyu, Infinite’s Nam Woo Hyun, BEAST’s Son Dong Woon, and FT Island’s Lee Jae Jin.

In the photo, the six idol stars show their close friendship as they make a playful gesture with their hands stretched out, evoking the image of cartoon characters. Fans have been impressed by the camaraderie of the 1991-born stars, even though they all come from different groups.