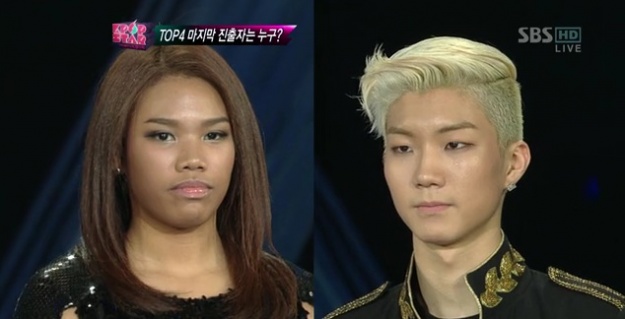 On the April 8 episode of SBS “K-Pop Star,” Park Jin Young, the producer better known as JYP, made a comment that is sure to generate lots of discussion.

During the show, Lee Michelle, the half-Korean, half-African American contestant with exceptional vocal skills, was eliminated by Lee Seung Hoon, the phenomenal dancer who’s shown flashes of brilliance despite being labeled as the “least talented” out of the TOP 5 contestants. The result came as a surprise as Lee Michelle’s stunning performance of Soul Society’s “U Just” earned her many compliments from the judges, and a higher judge score than Lee Seung Hoon.

Lee Seung Hoon, however, showed a lackluster cover performance of Psy’s “Champion,” which was not received as well by the judges, amounting to the lowest score out of the TOP 5 contestants. Judging from the score and evaluations, as well as the crowd’s response, it almost seemed like a no-brainer for Lee Michelle to advance to the next round.

However, the final cut on SBS “K-Pop Star” each week is decided by a combination of different factors, including the judges’ scores, pre-show online poll, and viewer text messages during the show. Surprisingly, Lee Michelle has not been able to earn the love of the viewers, as she consistently ranked at the bottom for all online polls, while Lee Seung Hoon has become the fan-favorite, rounding out the top two or three on most weeks.

This week was no different, and as a result of a lopsided viewer response during the show, Lee Seung Hoon was able to overcome his poor performance (and low score) to eliminate the clearly more talented singer, Lee Michelle.

As JYP announced the winner between Lee Michelle and Lee Seung Hoon, he seemed to show his frustration at the results, as he emphasized, “JYP will be casting Lee Seung Hoon because it’s the viewers’ choice.”

At the closing moments, JYP went on to highly praise Lee Michelle for overcoming the racial barriers in Korea’s conservative society. He said, “I have one thing to tell Lee Michelle. I kept asking her (during our training) why she couldn’t clearly express her true feelings. But she just said, she couldn’t express herself because growing up she’s been hurt so many times by so many people.”

“I strongly believe that all the parents (in Korea) must continuously teach and educate their child not to make fun of someone, or make derogatory comments, just because of that person’s skin color or race. I wonder if there’s any other country than Korea that’s so close-minded and oppressed in that manner. And I would like to applaud Lee Michelle for overcoming all the barriers and showing a new possibility with her performance today.”

In case you haven’t seen any of Lee Michelle’s performance, here’s a clip of her singing Gummy’s “Forget Me” and Beyonce’s “Halo” on “K-Pop Star.” We hope to see her again with her own single soon!