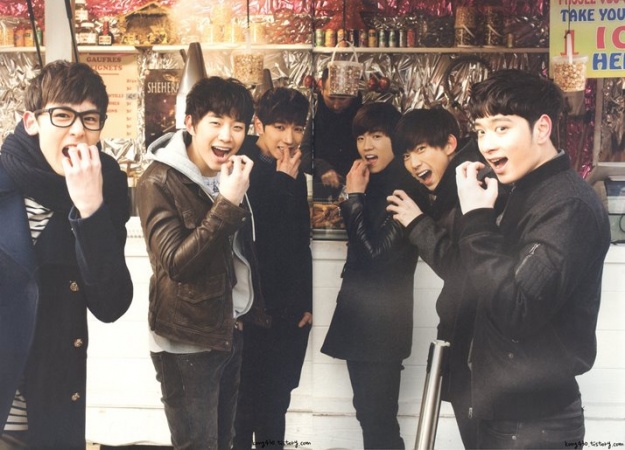 On April 1, 2PM held a fan meeting in Korea at Kyunghee University with an incredible presence of 4,000 fans.

The fan meeting, called “Hottest Party” had several activities held by the 2PM members, to entertain their fans and make this day unforgettable for them. In the event, they got dressed as animals for their segment called “Animal Kingdom” in which Wooyoung was a Koala, Nichkhun was a bear, Chansung and Junho were monkeys and Junsu was a bee while Taecyeon was in charge of narrating the story.

Also, the event had special features like the parody they made of “The Moon that Embraces the Sun,” which brought laughter to their fans by seeing Chansung acting as a bewitching woman with long eyelashes, Nichkhun acting as the bitter queen and Taecyeon acting as the funny eunuch.

Among many other surprises, fans could hear the Korean version of their Japanese song “Hanareteitemo” which is included on their “Republic of 2PM” Japanese album. Also, fans could ask them for advice to their problems in the “Talk Show” section. 2PM answered questions such as “How to stop eating ramyun at night”, “how to date a guy for more than 100 days” and also “how to convince my mother that I don’t want double eye surgery”, the answer to the last one being, “Tell her you are approved by 2PM.”

Fans had an amazing experience celebrating April’s Fools day with their favorite idols.

Wanna see how the “Hottest Party” came out planned? Check out the making film of the whole event below!