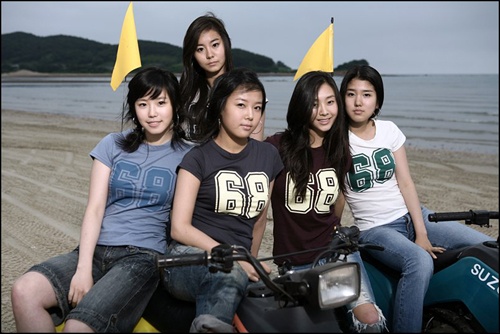 How would a girl group consisting of After School’s Uee, Wonder Girls’ Yubin, Secret’s Hyosung, SPICA’s Yang Ji Won, and G.NA look like? All of these female stars are known for their perfect bodylines, yet this superior combination was once a reality.

On April 9, an online community board uploaded a picture with the title: “Girl group Five Girls would have been popular for their perfect bodylines if they debuted.” The members consist of the singers mentioned above and were passed from an audition called “Battle Shinhwa,” but unfortunately failed to debut.

The interesting fact is that the five celebrities all have great bodies. Uee became popular for her honey thighs and S-line, Hyosung is well known for her glamorous figure, G.NA is one of the representatives of the sexy female solo singers, and Yoobin is the “body” member of Wonder Girls. Rookie girl group SPICA member, Yang Ji Won, is also fluttering male fans’ hearts with her glamorous body.

Netizens who came across the post commented: “Huk (a sign of surprise). They are the best,” “Ah how did I not think of this?”, “Alright alright let’s see them again as a project group,” “Wow they would’ve probably succeeded,” and “Just imagining them makes me happy.”