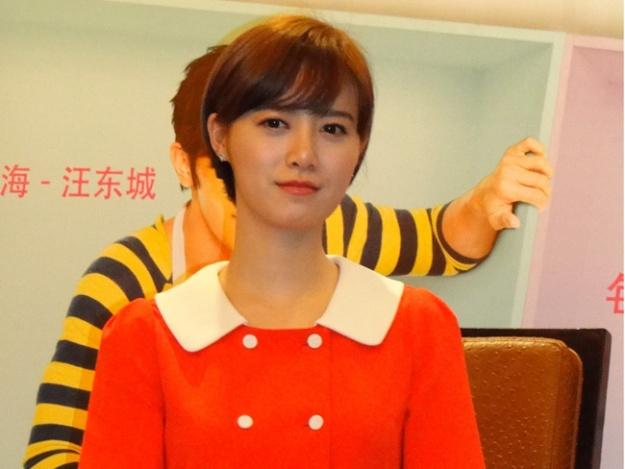 Goo Hye Sun: It is my first time in Singapore, I’m happy to meet all of you.

Host: Jiro, it’s your first time to work with a Korean actress, how was the experience for you?

Jiro: It’s a new experience, I realized that I’d put in even more focus on my work because, in the past, you could hear the lines the actor acting opposite you, but with the language barrier, we didn’t have much chemistry at the beginning. So you would end up paying more attention to the person’s expressions and body language. I feel that there are more sparks after we achieved the chemistry.

Host: It’s also Goo Hye Sun’s first time to work in a non-Korean production, what was the difference you felt?

Goo Hye Sun: At the beginning, language was a problem so we didn’t have a great level of chemistry. As filming progressed, we would observe each other’s expressions and know what to do next. Our chemistry also improved.

Host: Did Jiro discover anything surprising about Goo Hye Sun while working with her? Such as her huge appetite? Did it frighten you?

Jiro: For a girl, I admire her appetite because to eat is a blessing. Furthermore, the best part about visiting a foreign land is to try its cuisine and Goo Hye Sun has no qualms about trying all the different dishes. Taiwan has a lot of delicious local snacks so its great to have a good appetite.

Host: Goo Hye Sun, is there any Taiwanese local cuisine or snack that has left an impression?

Goo Hye Sun: Smelly tofu is one of the unforgettable one and dumplings.

Jiro: I feel honored as it’s her favorite food, it must mean we are good. I was actually rather curious about the reason but didn’t have the chance to ask her as she was always busy traveling.

Host: So we can be sure it’s not because of their smell?

Jiro: I’m satisfied with her answer.

Host: You are a robot in the drama, how did you decide to play the role when you accepted it?

Jiro: I felt I was met with a challenge at that time because for other roles such as chef or doctor, there are some context, but as a robot, you’ll realize that there are very few people who have acted a robot and there are a lot of the robot’s responses that wouldn’t come off from a human, there was no experience so I did a lot of homework and even engaged a teacher to work on my acting delivery. Some parts of acting could become a habit so I had to overcome that.

Host: What’s the expression you had to make while acting as a robot?

Jiro: You cannot be figured out in what you are going to do next, but you executed it perfectly. Because I’m a perfect lover in the drama, there are a lot of such scenes in the drama. I had to keep very fit for the role and I’m envious of Goo Hye Sun who could keep drinking the bubble tea that I love as well. It is very high in calories but I could only take a little.

Host: In the scene when Night was delivered to you, would you have the same reaction if its a real life situation?

Goo Hye Sun: I think I would be very happy if there’s a robot like Night being delivered to me in real life. (Jiro asked in Korean: Really?)

Host: Would you pounce onto him?

Goo Hye Sun: (Laughs) I would hug him.

Question: What is your ideal type in real life?

Jiro: I hope she is someone who is good at cooking. Perhaps because of my mother(‘s cooking), I hardly eat out and usually eat her cooking. I could make some decent dishes myself, including dumplings. I had picked up some skills partly because some of my earlier roles were as a chef.

Goo Hye Sun: Kind and polite. Although having handsome looks are good but it’s the personality that matters.

Question: Were there anything funny or embarrassing incidents during filming?

Jiro: The opening scene was very embarrassing for me, a naked man full of baby oil and had to fall onto the lady. Fortunately, I picked up the Korean words “Mianhe,” which means sorry.

Host: Goo Hye Sun, how does it feel to be covered in oil?

Jiro: I had to slide off her body in that scene… mianhe! I feel very sorry because we had to do a few takes on that.

Host: Are you sure it wasn’t done on purpose?

Jiro: Not it wasn’t. I also picked up another Korean word “Kwenchanayo”, meaning it’s alright.

Host: Did you have to keep changing your clothes in that scene?

Goo Hye Sun: I think Jiro is the one who would feel more embarrassed during the filming of that scene as there were many staff around, but he looked very relaxed on that day. Only now did I know that he was struggling to stay calm.

Jiro: I could only say I’m a very professional actor, nobody could tell that I was very nervous.

Host: You had to wear Granny underwear with lace in that scene.

Jiro: That’s right, in the Japanese version, the male actor’s vital part was covered by props such as table legs and vase so I was wondering what kind of shorts should I be wearing, even a swimming trunk would do even though it would be indoor. But because of post-production, the team prepared a skin colored safety pants for me which turned out to be lacy pants in nude color.

Host: Did Goo Hye Sun find it funny that such a manly Jiro has to wear the Granny underwear? What was your first reaction when you saw it?

Goo Hye Sun: The underwear wasn’t very visually aesthetic, I thought it might have been better to just wear normal underwear, but after the episode was aired, the mosaic effect was applied during post-production. So I realized why the director wanted skin color underwear.

Hiro: It was indeed very embarrassing as the number of people present at that time is as much as this room now, and everyone had their handphone out to take pictures. Because the lace may show, the director wanted me to tuck in the lace, so the underwear became smaller and smaller.

Question: How did you prepare for the role? Did you have to body-build?

Jiro: I love to exercise and you would have seen some of the Farenheit pictures from our last album. I’d stepped up on bodybuilding back then like hitting the gym once to twice a week, but with this drama, it was almost daily. I even brought dumbbells to the filming set. As for the Korean language. Learning is very limited, but we had gone through lessons on body language without speaking, so we had to guess what each other is trying to express. Because of the lessons, we could better understand each other more.

Goo Hye Sun: The character is someone who has never fallen in love and quite innocent, so I felt the need to discuss and communicate with the director and scriptwriter. When I came to Taiwan, I’d spent a lot of time with them to discuss and develop the character.

Last Question: Did they hang out together to build up their chemistry?

Jiro: We did have meals with the staff from our agencies and also took lessons together.

Goo Hye Sun: In the drama, the characters weren’t very close initially, so maintaining the awkwardness has actually helped in our acting.

An exclusive Romantic Cruise fan event was held after the press conference. Due to heavy rain during the day, the sea was very choppy and everyone on board the cruise has a hard time trying to balance.

After an introduction and short interview, Jiro Wang and Goo Hye Sun were asked to toast with intertwined arms. Two pairs of female fans were picked to mimic them instead of a boy-girl couple as there were no male fans present. The game almost couldn’t carry on as many started to feel seasick with the strong waves.

After some rest, Jiro Wang and Goo Hye Sun went up to the open deck to enjoy the sea breeze.

A group photo on board the cruise was part of the original program but it was canceled and the cruise shortened due to the bad weather. As an apology to the participants, fans were arranged to take photos with the cast in pairs when they returned to the mainland. It was very thoughtful of the organizer to have done so.

“Absolute Boyfriend” has premiered on April 8 on Channel U in Singapore, be sure to catch the drama on every Sunday at 9:30 p.m. local time.

Special thanks to Channel U for the invitation to the press conference and exclusive cruise event.