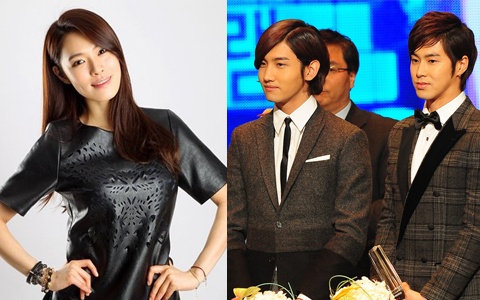 After School’s Kahi expressed her admiration for DBSK’s performance on April 14 at Japan’s Tokyo Dome.

On April 15, Kahi tweeted, “I went to DBSK’s concert in Tokyo. It was truly a great performance! I definitely had a lot of thoughts [after watching the performance].”

After School will have their first solo concert in Japan on April 27 and after seeing DBSK’s performance that night, she had a few words to say regarding the impressionable concert. She tweeted, “I still have a dream. I am a person who cannot work if there is no authenticity…I want to be real. Because there are those that respect me as a performer, I want to do my very best for them.”

Many speculated that Kahi had hard feelings regarding the addition of another member, 17-year-old Ga Eun. On April 14, Kahi tweeted, “Why a nine-member group? What is this? Well, I’m telling you, it’s like this…Working so hard but it really casts a grey cloud.”

Upon writing the tweet, fans were shocked to hear Kahi’s disappointment. Kahi quickly addressed her previous tweet and tweeted again, “Please don’t misunderstand~ the new recruit knows. Please keep supporting Ga Eun and After School! We are practicing for the upcoming concert. Really looking forward to the concert in Japan!”

Many fans are excited about Ga Eun joining the group. What do you think about Kahi’s tweet? Was it a misunderstanding?

After School
Ga Eun
How does this article make you feel?