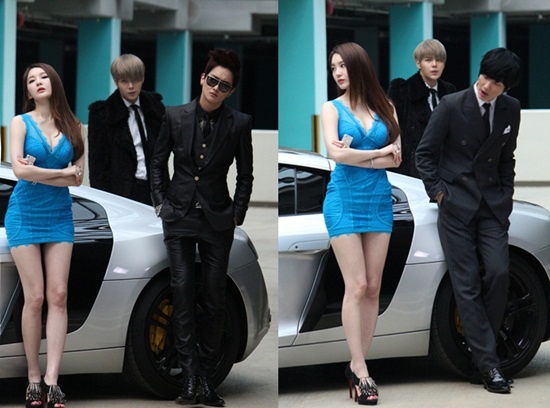 Davichi’s Kang Min Kyung once again showed off her sexy body! An online community board posted the photo with the title, “Kang Min Kyung’s body which causes a mental breakdown.” In the picture, Kang Min Kyung is wearing a blue dress that reminds one of lingerie. The dress features his glamorous body.

The picture is a still from the music video filming for “Stupid Love” which is Cho Shin Sung’s new track. Cho Shin Sung will comeback on April 18. The members of Cho Shin Sung are surrounding Kang Min Kyung, but she is acting haughty and indifferent.

The song “Stupid Love” and its music video will be released through online music websites through April 18.

As one can see in Soompi’s “New Albums and Singles Preview – 2012 April Week 1,” Davichi’s other member Lee Haeri collaborated with Yangpa for her new single “Love Is Like This.”