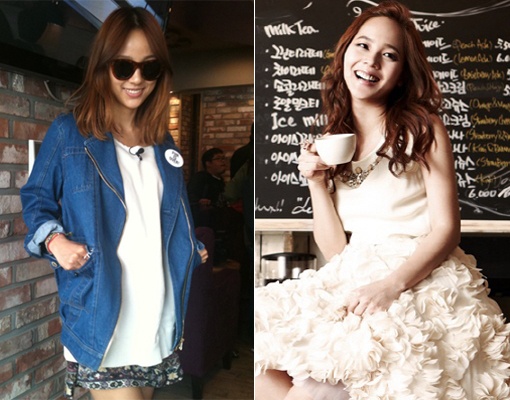 The original K-Pop girl group sensation leaders Lee Hyori and Eugene are hosting two different reality shows that air on the same day. As they have been friendly rivals since Fin.K.L. and S.E.S days, many fans are paying close attention to their new programs.

First, Lee Hyori is hosting “Golden 12” on onStyle channel. “Golden 12” started airing on April 5, and throughout its 12 episodes, the show displays the daily lives of Lee Hyori and her colleagues as “Socialtainers (a hybrid term of social and entertainer, referring to entertainment stars like Lee Hyori who are interested and involved in social issues).” An official from “Golden 12” commented, “Since it’s a reality program, the lack of privacy and high exposure of a celebrity might be a big burden. However, Lee Hyori was more than happy to be a part of this, saying that ‘she wants to get rid of the ‘fairy’ image from her Fin.K.L days.'”

On the other hand, Eugene is hosting “Super Couple Diary” on StoryOn channel, starting from April 19. “Super Couple Diary” is a reality show that displays daily lives of celebrity couples. In its very first episode on April 19, Eugene and her husband Ki Tae Young are visiting Italy’s coffee road. Eugene’s agency G.G Entertainment stated, “Eugene was not hesitant in making her decision at all. Since she’s so down to earth to begin with, she is completely okay with revealing her private life on camera.”

Both shows air every thursday. Lee Hyori’s “Golden 12” is on onStyle at 11:10pm and Eugene’s “Super Couple Diary” is on StoryOn at 2pm KST.