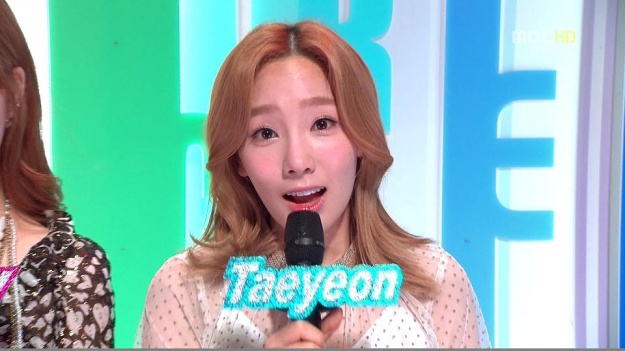 Taeyeon has become the latest Girls’ Generation member to become involved in a plastic surgery accusation. On April 15, photos of Taeyeon under the title, “Taeyeon keeps going backward,” was posted on an online community board. The top two photos, captured during the April 14 show of MBC “Music Core,” are at the center of controversy for Taeyeon’s allegedly changed looks.

In the photos, Taeyeon does look a bit different from the bottom two photos taken from a while back. Her slightly bleached hair and apparent weight loss make her face look slimmer than her old photos. However, the changed looks seem more of a result of her different style, not so much of the alleged plastic surgery. Fans seem widely split on the accusations. But this is the second plastic surgery rumor involving a Girls’ Generation member in the last couple weeks, so fans are questioning if there’s other motives behind spreading this unfound rumor. Jessica was also accused of going under the knife late last month.

Regarding this rumor, SM Entertainment spoke with local media Star News and said, “We find it ridiculous to be involved in another rumor, especially when they’re working so hard to keep up with their busy schedules.”

Netizens commented, “Her nose looks slightly different,” “I think it’s the hair,” and “You guys are just being ridiculous.”

Hyoyeon
Music Core
Taeyeon
How does this article make you feel?