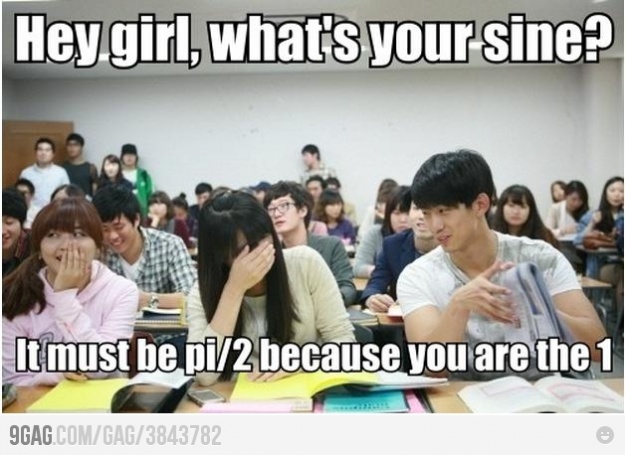 2PM’s Taecyeon Gets an A+ in Flirting Level

2PM’s Taecyeon made it to 9gag.com, the U.S.-based popular comedy website, for his “flirting skills.” On April 15, Taecyeon alerted his fans by retweeting the link to his picture on 9gag, saying, “HOLY CRAP! Me on 9GAG LOL RT.”

In the photo, Taecyeon is seen making a move on a female student sitting next to him, in what looks to be his college classroom. It looks like he said something funny, as the two girls next to him are giggling in amusement. 9gag aptly titled the moment, “Flirting level: A+,” and came up with quotes that said, “Hey girl, what’s your sine? It must be pi/2 because you are the 1.”

However, the joke didn’t come across as clear enough to most of the viewers as many comments expressed their confusion over the formula. In order to make sense, some claimed it should be written “arcsine” instead of “sine,” but most of the fans just seemed more interested in finding out who Taecyeon was.

Netizens commented, “I don’t get it,” “The girl is just happy because a K-Pop artist talked to her,” and “I smell racism here.”