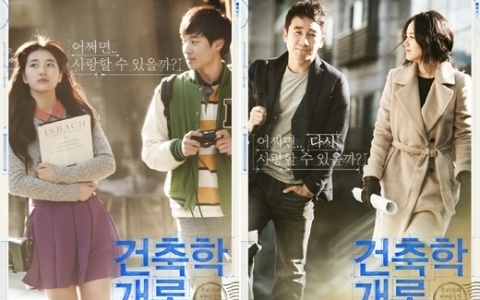 The film “Architecture 101” is about to make a new record, rapidly approaching 3 million in viewership. According to Korean Film Council’s movie theater ticket sales data, “Architecture 101” had 32,272 viewers on April 17 alone, accumulating a total of 2,980,530 in attendance since the movie’s opening. Experts are certain that the film will reach 3 million viewers on April 18.

If such steady attraction of viewers continue, “Architecture 101” might be the new most popular romance movie of all time in Korea. Currently, the title is held by Hwang Jung Min and Jeon Do Yeon‘s “You’re My Sunshine” in 2005. “You’re My Sunshine” had a total of 305,000 viewers. Some optimistic film industry officials are expecting “Architecture 101” to exceed 3.1 million viewers of Lee Na Young and Kang Dong Won‘s “Maundy Thursday,” which also is classified as a romantic melodrama, as well.