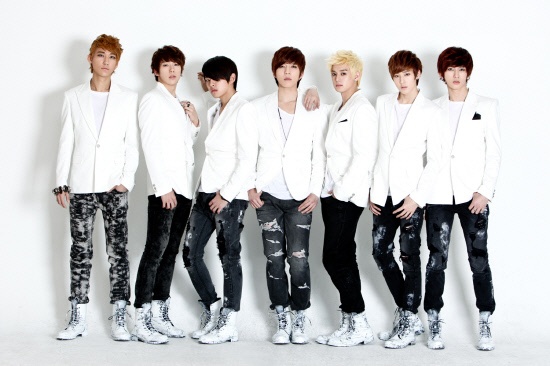 U-KISS is coming back to Korea with 6th mini album “DORADORA” after a successful Japanese career. Members of U-KISS commented, “Since we were successful in Japan, this Korean album and upcoming Korean activities are now more important than before.” U-KISS focused solely on their Japanese career since last October.

In early March, U-KISS had their first Japanese concerts “First Japan Live Tour 2012” in Sapporo, Osaka, Fukuoka, and Tokyo. The concerts were extremely successful and U-KISS earned the title of “the next generation Hallyu idol.” Moreover, their first Japanese regular album “A Shared Dream” and single album “Forbidden Love” were ranked at the second and fifth place on Oricon Weekly Chart. Keven stated, “I feel like we have finally settled in Japan after our concert tour. If I were to say that we had about 5000 fans who are willing to pay to come see us perform before the concerts, now our fandom has doubled in its size.”

Currently, U-KISS has their Japanese activities scheduled until March 2013. Their Japanese agency AVEX is thinking about U-KISS’s concert at Tokyo Dome, mediating their future Japanese schedules accordingly. AJ and Hoon commented, “Among K-Pop idol groups, only DBSK performed at Tokyo Dome. When we heard of the big plan about us performing there, we were worried. We thought, ‘Can we really do it? Is our dream finally coming true?’ Since we have a lot of expectations, we want to keep pushing and practicing to be better.”

U-KISS believe that they have become popular in Japan because they were friendly and approachable. They communicated with fans via twitter and other social networking services. They approached fans with various fan meetings and tried to look each and every fan in the eyes whenever the circumstances allowed. Eli said, “I think all the charisma and made-up images can stay onstage. We approached our fans like friends and peers and our fans loved it. I believe that the gap between our onstage selves and friendly offstage images attracted the fans.”

Now U-KISS is putting their success in Japan behind to focus on Korean activities once again. They are thinking of it as “the new beginning.” They worked with composure Kim Hyung Suk to re-enact the fame and popularity of “Man Man Ha Ni,” and “Bingeul Bingeul.” Dong Ho commented, “I heard there are more than 40 new idol groups to debut this year. We are going to keep our composure and do our best. Also, we are going to appeal our newbie-like cute, lively sides, too.”

Check out the teaser video of U-KISS’s new song “DORADORA” below!

Avex
U-KISS
DORADORA
How does this article make you feel?