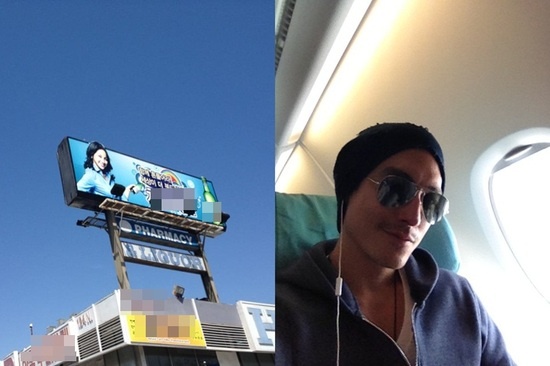 The photo he sent her shows a street billboard with Lee Hyori’s picture on it. The image on the billboard looks like the soju advertisement Lee Hyori is the main model for. He followed it up with a photo of him in the flight, with another brief message, “See u in Singapore :)”

However, Lee Hyori didn’t seem to excited, as she only send him a terse response, “Hul~,” which is a Korean slang for “Oh!”

Netizens who came across the Twitter conversation commented, “Who knew Lee Hyori would be friends with Daniel Henney?” “How did he find that billboard?” and “Is Daniel Henney hitting on Hyoiri?”

Daniel Henney
Lee Hyori
How does this article make you feel?