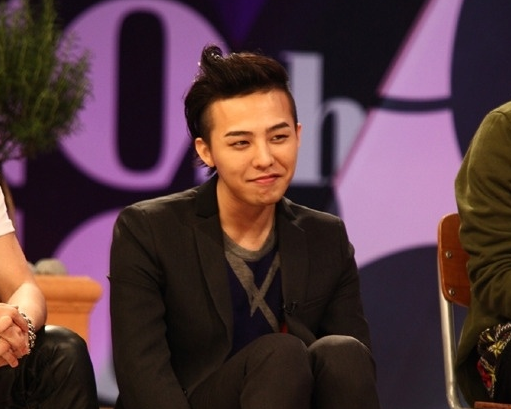 Big Bang‘s G-Dragon revealed the secret to the birth of his hit songs.

On the April 20 broadcast of SBS “Go Show,” G-dragon revealed that when he blinks his eyes, a hit title song is produced. His “secret power” drew a lot of people’s attention. Even singer-songwriter Yoon Jong Shin was impressed by this statement. He automatically clutched G-Dragon’s hand and said, “please give me some of your powers.” This brought a lot of laughter to the set.

This day, G-Dragon revealed his system of writing lyrics and producing songs. He humbly admitted, “I don’t think I’ve ever written an entire song by myself. Even if I have, it hasn’t been revealed to the public. I usually work with our in-house producer Teddy.” G-Dragon said that through having casual everyday conversations with Teddy, they naturally transition those topics into their music and start composing.

Fellow Big Bang member Daesung also had his solo track produced in this way. G-Dragon revealed, “after all the incidents that he had been through, Daesung came up to me and said, ‘I can sing sad songs or very fast songs. But I can’t sing medium tempo songs because I feel sorry and awkward making eye contact with my fans.'” G-Dragon stated, “When I heard Daesung say this to me, I felt my heart ache for him.” After his conversation with Daesung, G-Dragon started composing “Wings,” a song which he thought fit Daesung’s colors. Fortunately, the song has received a lot of love from the public.

MC Go Hyun Jung, who professed to being Big Bang’s fan herself, complimented the song “Wings” and Daesung’s voice.

***Click on the blue arrow on the top right to watch a short clip of the show.***

Big Bang
G-Dragon
Go Show
How does this article make you feel?