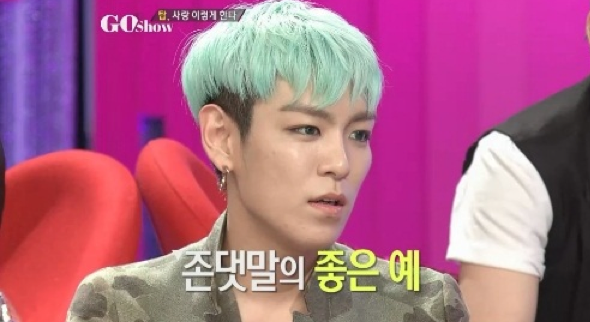 Big Bang TOP: “I don’t like women who are rude and curse.”

**Click on the blue triangle on the top right to watch a 3-minute clip of the show!**

TOP explained, “I use formal language no matter what. I think it’s good to have a certain amount of distance. I’ve had that sort of fantasy every since I was younger. I keep my distance and observe.” He added, “When you use formal language, and you’re in a situation to used profanities during an argument, you use banmal. To someone who used formal language, banmal is like cursing.”

When asked what actions he doesn’t like about women, TOP said, “It’s rude actions and swearing. And mixing curses into conversations.”

Go Hyun Jung
Seungri
Go Show
How does this article make you feel?