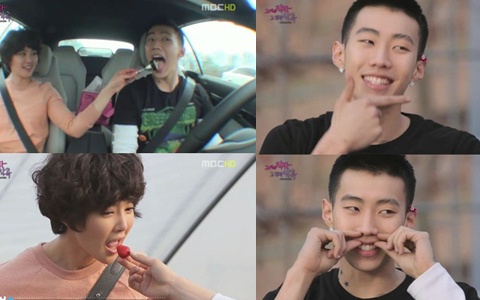 The singer was featured on the April 21 episode of “Music and Lyrics” with Lee Si Young. The actress placed a flower in Jay Park’s hair and asked him to show her some aegyo. He did not disappoint and said, “Boys over flowers?” Then posed cutely by placing his hands underneath his chin and smiled. He also showed his other 4 cute aegyo poses.

In the second episode, Jay Park had a date with Lee Si Young at a strawberry patch. On their way to the second location by car, Lee Si Young fed Jay Park her homemade kim bap. She commented that this was the first time that she had fed anyone. When asked if it tasted good, Jay replied, “It’s really good…maybe it’s because I’m so hungry? But it tastes really good!”

Jay Park returned the favor by feeding Lee Si Young a strawberry while at the farm. Sprinkling on the aegyo, he quipped, “It tastes awesome, right? Just like honey!”

Lee Si Young commented that if she were to live in the countryside with Jay Park, she would never be bored. Jay Park may have had similar feelings. When driving back from the farm, when Lee Si Young fell fast asleep; he confessed that he wanted to hold her when seeing her sleeping so peacefully and beautifully.

What did you think of the two interacting? Is there something in the air?

Jay Park
Lee Si Young
How does this article make you feel?