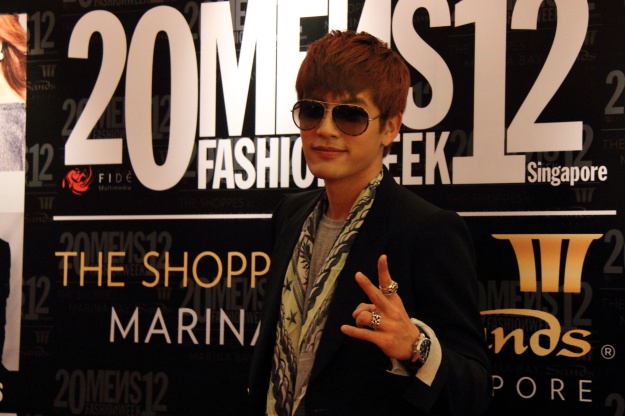 The “Men’s Fashion Week 2012” held in Singapore from April 18 to 22 has seen participation by some of the industry’s top labels and models. The event has also for the first time, weaved pop music into its fashion nights by performances from Se7en, 8eight and YouTube phenomena Sungha Jung and Megan Lee.

Se7en attended the opening night that showcased the labels Spencer Hart of UK and Songzio from Korea which featured model-turned-actor Lee Soo Hyuk. Beyond Closet, Vandal, Resurrection, D.Gnak and General Idea‘s collections were showcased on the second day themed “Korean Night”. Se7en performed his latest and past hits “When I Can’t Sing,” “Digital Bounce“, “La La La“, “Better Together” and encore song “Passion.”

Besides performing solo on his own, 15-year-old Sungha Jung also teamed up with 16-year-old Megan Lee, accompanying her powerful vocals on guitar. The guitar prodigy rose to fame with his Fredie Aguilar cover of “Anak” four years ago, his videos have since garnered 457 million views. Megan Lee, a Korean-American actress better known for her cover songs posted on YouTube, was the winner of 2NE1‘s “Lonely” cover contest.

8eight wowed the crowd with their amazing vocals on stage. Check out the action of these performing guests in this video clip and more pictures from our gallery!

Tidbit on the side: The audience love Sungha Jung and Megan Lee’s pairing so much that they wished for them to date each other! Both of them shyly declined saying they treat each other like brother and sister. Oh well… who knows what the future holds for them right?! �de42