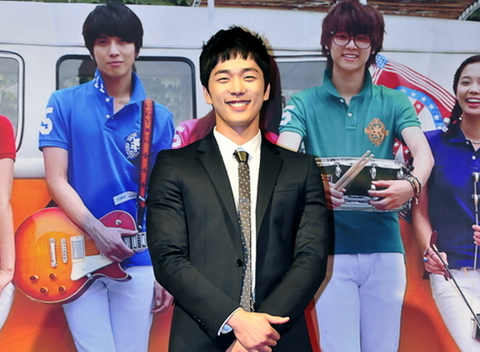 On last night’s episode of SBS “Strong Heart,” “Heartstrings’” Lee Hyun Jin revealed that he weighed 108kg (238 lbs) in high school. He confessed, “When I was a sophomore in high school, I weighed up to 108 kgs.” The actor continued, “I broke up with my girlfriend from freshmen year because of my weight,” stating the motivation behind his decision to lose weight.

Lee Hyun Jin revealed, “I lost 40kg in six months,” surprising fellow guests and viewers. He explained, “I only ate tofu for two meals a day and ran 20 laps around the track. After six months, I lost all that weight,” surprising both the guests and the viewers.

Apparently, Lee Hyun Jin visited his friends’ homes to find and destroy all of the photos containing his chubbier self. However, producers of “Strong Heart” managed to get a hold of one of the photos and showed everyone what Lee Hyun Jin used to look like. MC Shin Dong Yup commented, “You resemble the person in the North,” referring to Kim Jong Eun, the current supreme leader of North Korea.

Heartstrings
Lee Hyun Jin
Strong Heart
How does this article make you feel?