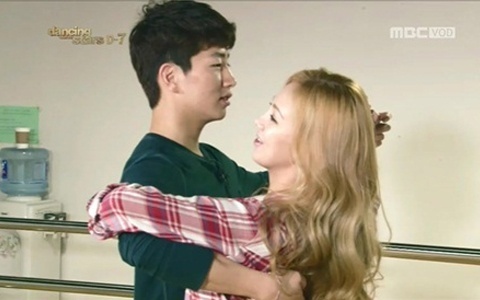 Hyoyeon on "Dancing With the Stars Korea: Season 2"

On April 27, on a preview for “Dancing With the Stars Korea: Season 2,” the show’s twelve contestants and their dancing partners were revealed.

A short clip of dancer Kim Hyung Suk and his partner, Girls’ Generation’s Hyoyeon was featured in the clip. Hyoyeon’s partner said of the singer, “When Hyoyeon smiles she looks cute.” The two seemed to get along with one another – a good sign of things to come as each team needs to be synchronized for the upcoming competition.

Facing the first practice session for the first dance challenge, the tango, Hyoyeon commented that it was difficult at first because it was awkward to feel natural with her new partner. She continued to remark that although she has done many dances, she has never danced choreography that put her so physically close to her partner.

MBC’s Dancing with the Stars Korea pairs a celebrity with a professional dancer and teams face off with one another each week.

The show will begin live broadcasting starting May 4.

Hyoyeon
Dancing with the Stars Season 2
How does this article make you feel?