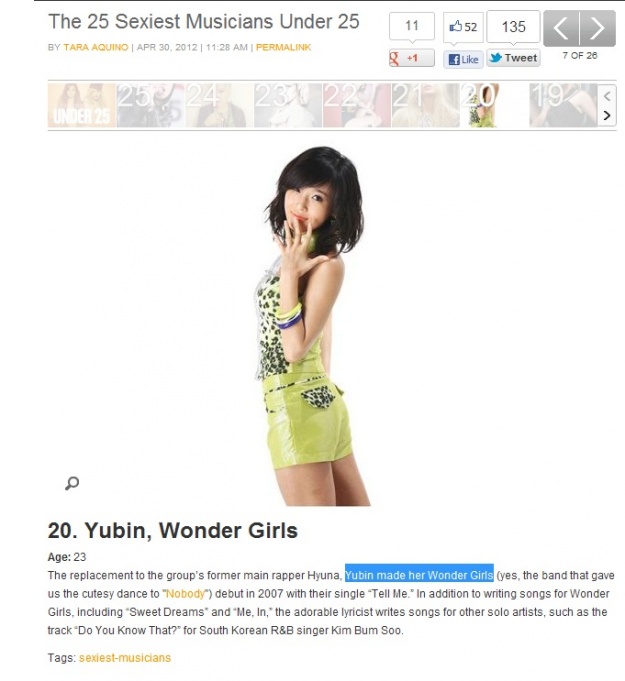 Recently, the U.S. music and style website, Complex Music, put together a list for the “25 Sexiest Musicians under 25.” The list had some of the hottest female stars from around the world, including Taylor Swift, Miley Cyrus, Selena Gomez, and Rihanna (who took the #1 spot).

But what really captured the interest of K-Pop lovers was the fact that Wonder Girls’ Yubin placed #20 on the list, beating out every other K-Pop female musician. The site described the 23-year old Yubin as:

“The replacement to the group’s former main rapper HyunA, Yubin made her Wonder Girls (yes, the band that gave us the cutesy dance to “Nobody”) debut in 2007 with their single “Tell Me.” In addition to writing songs for Wonder Girls, including “Sweet Dreams” and “Me, In,” the adorable lyricist writes songs for other solo artists, such as the track “Do You Know That?” for South Korean R&B singer Kim Bum Soo.”

Netizens commented, “Yubin has the looks that appeal to Westerners,” “I always thought she was sexy,” and “She needs to record her own album.”

Which K-Pop star would you have picked?

HyunA
Rihanna
Wonder Girls
How does this article make you feel?