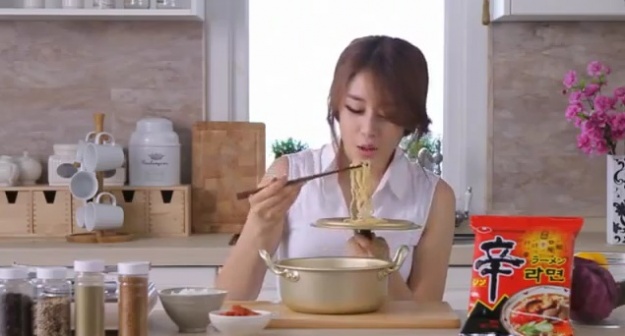 T-ara Jiyeon’s recent commercial for the Korean noodle brand, Shin Ramyun, has caused quite a controversy in Japan for her apparently “barbaric” table manners.

In the commercial that only airs in Japan, Jiyeon gives her recipe to the best “Shin Ramyun” dish. She shares the secret to cooking a “traditional Shin Ramyun,” giving the exact time to boil the noodles and the type of ingredients needed to complete the dish.

But as she starts to munch on the noodles, Jiyeon uses the lid of the pot as her dish. Although it’s pretty common in Korea to eat ramen off the lid of the pot, some of the Japanese netizens took it the wrong way and criticized her table manners as being “barbaric” and “uncivilized.”

Hundreds of comments were left below the video, mostly questioning her behavior with the pot lid. They said, “I find it almost barbaric to use the lid instead of a regular dish,” “That’s just disgusting,” and “It’s just cultural differences.”

Meanwhile, Hyomin of T-ara tweeted in response, “Ramen always tastes better when you eat it off the pot lid. And the lid will of course be cleanly washed with the pot. Ah! I want to have ramen on a nickel silver pot.”

Check out the controversial video below!