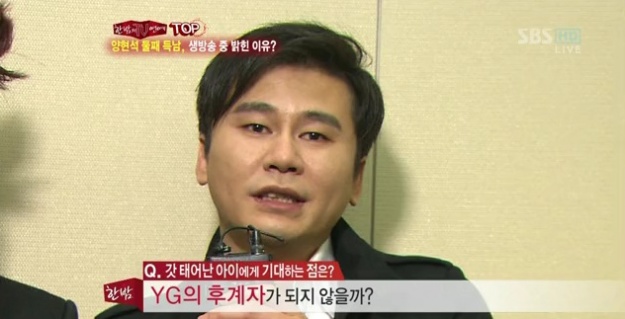 Yang Hyun Suk, the founder and chairman of YG Entertainment, gave his honest feelings about his newborn son during an interview with SBS “One Night of TV Entertainment.”

Yang Hyun Suk was asked why he decided to reveal his second child is a son for the first time during the live recording of SBS “K-Pop Star.” He said, “My son just knows how the industry works. Somehow, he decides to get born two days before the final episode (of ‘K-Pop Star.’) I wanted to make it public for the first time in front of my good friend Park Jin Young, and also during the show that I’ve been a part of for the last seven months. So I didn’t tell anyone around me or to the press either. It was hard to keep it a secret.”

He continued, “He looks a lot like me. I’m guessing he will become the successor of YG. I think he’s going to take control of YG Entertainment in the future.”

Yang Hyun Suk’s first child was born in August, 2010. He has one daughter and one son between him and Lee Eun Joo, the former member of YG’s first girl group, Sweetie.