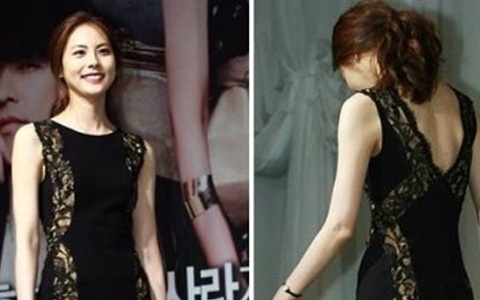 Park Jiyoon donned an illusion dress on May 3 for the “Goodbye Dear Wife” press conference. The drama has been gearing up to air on May 7 and in light of Ryu Shi Won’s divorce and the stunning drama stills that were released of both Park Jiyoon and Hong Soo Hyun, the drama has been garnering positive attention from media outlets.

Park Jiyoon wore an optical illusion dress with black on nude lace overlay curves that ran down her sides and back. The lacy curves gave the singer the right accents in the right places and also gave the illusion that the singer-actress was revealing skin. The dress showcased Park Jiyoon’s sexy s-line figure and the singer-actress proved that she still maintains goddess status.

Netizens commented on the pictures, “She really represents what a beautiful woman is supposed to be,” “The dress seems more revealing than a dress that doesn’t bare actual skin,” and, “She’s so pretty!”

Goodbye Dear Wife
How does this article make you feel?