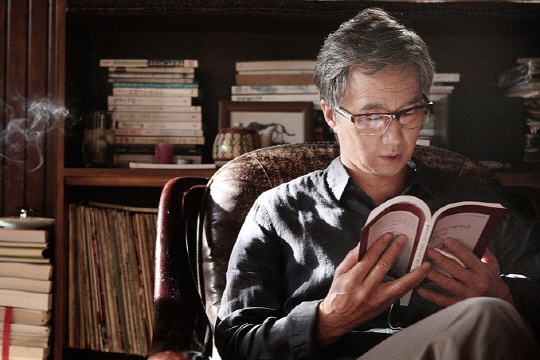 Director Jung Ji Woo of film “Eunkyo” confessed that the exposed male private part shown in the movie was not Park Hae Il‘s. He said, “Park Hae Il was in almost all scenes, but for certain scenes, we had to let science do its work.”

The scene where Lee Juk Yo (played by Park Hae Il) is staring into a mirror naked features Park Hae Il from chest and up. However, they used a body double for the rest. Although it may be possible to portray an old man’s body with heavy body make up, Park Hae Il’s thick and young torso could not express the same image as an old man. As a result, the genitalia shown in the movie is not of Park Hae Il.

Park Hae Il did not explicitly mention that he used a body double in the movie. As the “genital scene” garnered so much attention from the public, Park Hae Il as well as the production company did not feel the need to reveal the truth and lose such enthusiastic interest.

A representative of the film commented, “When filming dangerous or sensitive scenes, top actors and actresses often use body doubles. Of course, it would be preferable to have the actual actor or actress for the scene, but it is very typical and natural to use a body double to portray the scene as perfect as it gets.”

Park Hae Il
How does this article make you feel?