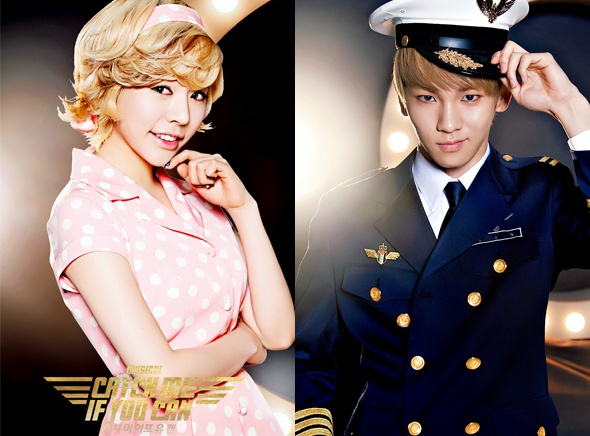 SHINee’s Key and Girl’s Generation Sunny are currently acting in the musical “Catch Me If You Can”. Do you wonder how a musical with K-pop stars looks like? Soompi attended the musical in Seoul to report you the best moments!

The musical “Catch Me If You Can” is an adaptation of the famous Steven Spielberg’s movie featuring Leonardo Di Caprio and Tom Hanks. Based on a true story, the musical describes how Frank Abagnale Jr., out of money, begins to rely on confidence scams and impersonates an airline pilot, a doctor and even a prosecutor. The FBI, led by Carl Hanratty, track him down for a long time before offering him a job at the bank fraud department of the FBI.

During the show Soompi attended, SHINee’s Key played Frank, whereas Girl’s Generation’s Sunny was Brenda, the girl who falls in love with the con artist. Kim Bub Rae played FBI agent Carl Hanratty. Lee Hee Jeong and Jeon Su Kyung took the role of Frank’s parents. All together, the company was made up of 13 actresses and 9 actors.

The musical started off with a bang as five FBI agents suddenly entered the room, making the audience jump. They entered through a back door and ran into the alley before reaching the stage. Carl then asked his men to search the room to find Frank. The agents went back up on the two alleys in pairs, pointing their guns at spectators. Suddenly, Frank (Key) entered the room by the back door and ran to the stage. The real show could finally start.

Many memorable moments have impressed the audience, taking them from sorrow to laughs. Frank’s first imposture took place in a high school, where he impersonated a fake French teacher. While being lost in the building, he asked his way to school girls who couldn’t helped but exclaim, “Wow he is so handsome!” to which he replied “I already know that, this is not what I wish to know right now”, creating laughs in the audience.

A few scenes later, an awkward meeting amazed the public: in his hotel, Frank met a woman wearing sexy outfits. Straight forward, she offered her services to him. As Frank didn’t refuse the woman’s offer, she asked him how much he was willing to pay. Naïve, he offered 300 dollars. Not satisfied, she started to show her legs to tempt him. Panicked, Frank stuttered “500 dollars?” Yet she was still not convinced and suddenly opened her coat. Showing her back to the audience, the public could only imagine her outfit, as Frank almost fall from shock. He finally offered her a thousand dollars and they left the stage together, surprising the spectators.

The musical also offered romantic moments such as when Frank proposed to Brenda (Sunny), the naïve and lovely nurse, in a bedroom. As Brenda didn’t understand why he wanted to marry her, he sang to express his feelings and the scenes ended with a kiss.

The audience could not forget the good bye stage between Frank and Brenda as well. During dinner with Brenda’s parents, Frank had to escape from the FBI. Frank chose that moment to reveal his true identity and say good bye to Brenda. The audience became completely silent as the two characters were kissing for the last time. Finally, Frank left the stage and Brenda sang to express her sorrow.

For the last stage, all the main characters made a solo performance before bowing to the audience individually. All the actors then gathered and sang altogether, acclaimed by the public. Everyone finally left the stage, except Frank who ran after Carl with a gun for a last humorous moment.

A word on the artists’ performances:

Key has performed very well the different sides of his character with humor and professionalism. As the main actor, he impressed with his ability to switch from singing to dancing to acting. Despite his heavy schedule and SHINee’s tour in Japan, he never showed any tiredness. He offered the public an outstanding and dynamic performance.

Sunny has also fully impersonated Brenda. Her acting was fresh and funny, but also moving when needed. Her solo performance was particularly well acted and amazed the audience. The other main actors as well as the whole company have been very professional, showing a real experience of the stage.

To conclude, the musical “Catch Me If You Can” is a beautiful show to which all the actors bring their own assets. Several shows will be performed until June, 10th. Kyuhyun (Super Junior), Eom Ki Joon (“Dream High”), Kim Jung Hoon (“Goong”, “I Need Romance”), Park Kwang Hyun and Key (SHINee) will alternatively play Frank in different shows, whereas Brenda will be impersonated by Choi Woori, Dana (The Grace) and Sunny (Girl’s Generation)

Don’t hesitate to share your impressions with us if you have also attended the show!