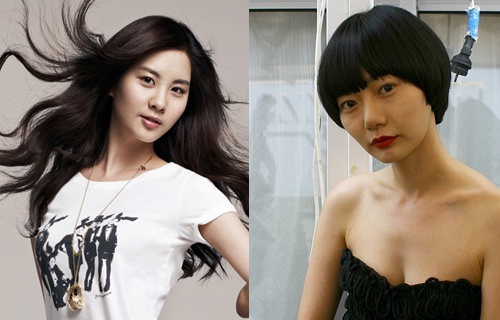 Who’s ready for another round of “Who Wore It Better?” This time it’s between Girls’ Generation’s Seohyun and actress Bae Doo Na.

On May 8, a post was found on an online community forum titled, “Bae Doo Na versus Seohyun – Same See-Through Dress, Different Feeling” along with several photos. The two beautiful ladies were captured wearing a red, slightly see-through dress by a famous French designer, Carven.

Bae Doo Na wore this piece to an episode of Mnet’s “The Voice of Korea,” which aired on May 4. The red dress complemented her white skin, which emitted a lovely and sexy feeling. Seohyun was spotted in this dress at the SME documentary, “I AM” showcase on April 30. She paired the dress with a black belt to show off her slender waist.

Netizens commented, “They are both pretty,” “Maybe it’s because both of them have such different styles but the feeling is very different,” “Seohyun is cute while Bae Doo Na is sexy,” and more.

Girls' Generation
Bae Doo Na
Who Wore It Better?
How does this article make you feel?