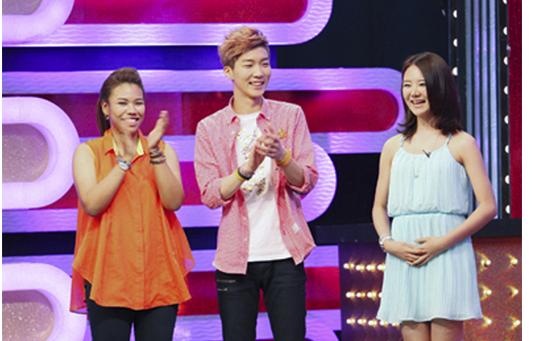 Lee Michelle introduced herself first. She professed to being a huge fan of MC Shin Dong Yup and asked if she could receive a hug from him. Shin Dong Yup was impressed with her boldness and gladly granted her request. Following Michelle, Lee Seung Hoon introduced himself next stating, “I am hip hop’s baby tiger, Lee Seung Hoon.” and said that he wanted to receive a hug from MC Lee Dong Wook. His reason was that his father’s name also happens to be “Lee Dong Wook.”

Lee Seung Hoon brought a lot of laughter to the set by addressing Lee Dong Wook as “father” and sharing a fierce hug with him. In addition, he asked, “Did you take a shower recently? I can smell my father’s scent from you,” bringing more laughter on-set.

Kim Na Yoon stated that she wanted to apologize to Boom. She said, “When I was participating in “K-Pop Star,” I didn’t know that your name was Boom. I first saw you sitting next to me while I was getting my makeup done. I asked the makeup artist who you were, and I misheard your name as Bom. I’m so sorry.” Following Kim Na Yoon’s apology, she shared a hug with Boom, who astonished everyone by making a greasy expression.