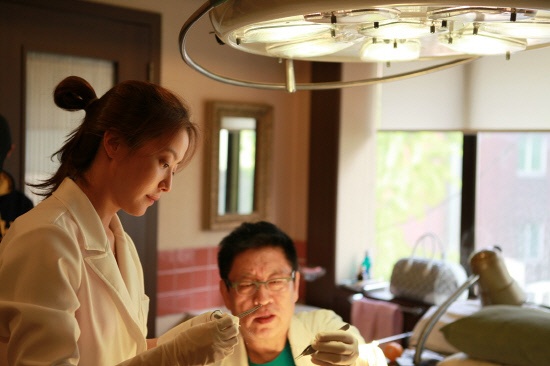 Kim Hee Sun, the beautiful actress that once ruled the K-Drama world, has admitted to her frequent visits to a plastic surgeon lately.

However, it’s not because she wanted to get a nose job or a double eyelid surgery done. It’s in order to get real-life training for her upcoming drama, “Faith,” where she stars as a plastic surgeon.

In the drama, Kim Hee Sun gets kidnapped by Lee Min Ho (“City Hunter”), who time-travels from the Koryo Dynasty era from more than 700 years ago. Her job is to cure the scar left on the princess’s body by an unknown assailant.

“There aren’t that many surgery scenes in the drama, but the idea is to portray a ‘doctor that came from the sky,’ so I need to show quick hands. Since this is my first comeback in six years, I’m doing my best to show good acting,” Kim Hee Sun said.

In fact, photos of Kim Hee Sun taking lessons at a plastic surgery center in Seoul were released recently. In the photos, she’s seen practicing the skills with the close guidance by a real-life doctor.

The surgeon who trained her said, “Plastic surgeries require very intense and top class hand skills. Kim Hee Sun has very good hands and I think that’s why she’s quickly learning. I think she can open her own office soon.”