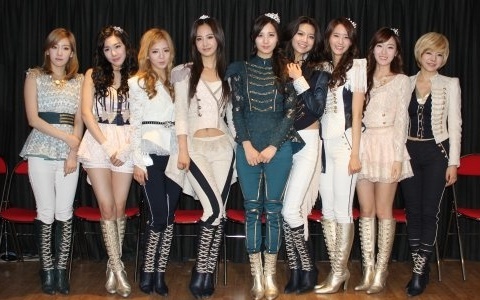 The members of Girls’ Generation confessed that their weight, which is in the forties range (kilograms), stays the same without any diets or exercise.

On the episode of “Happy Together” that aired on May 10, Girls’ Generation’s Taeyeon, Tiffany and Jessica along with comedians Shin Bo Ra, Park Ji Sun and Jung Joo Ri guest starred.

The talk was leading toward the theme of “Why Do Women?” and the members of Girls’ Generation were asked to truthfully reveal their weights.

They were asked, “Are there any members whose Internet profile weight differ from their actual weight?” Then Jessica answered, “I think my profile lists me as 45 kilograms (99 pounds) but it fluctuates by 1 or 2 kilograms from time to time.” Taeyeon and Tiffany also said that their weights fluctuate by that amount.

Then they were asked, “You all keep your weights in the forties range. Are you on any diets?” Then they answered, “No, we don’ go on diets. We hate exercising too,” which drew much envy from the cast.

Then MC Park Mi Sun commented, “Since you girls dance very hard on stage, I guess there’s no need for separate exercising for you to lose weight,” which made everyone agree.

Girls' Generation
Happy Together
Jessica
Taeyeon
Tiffany
How does this article make you feel?