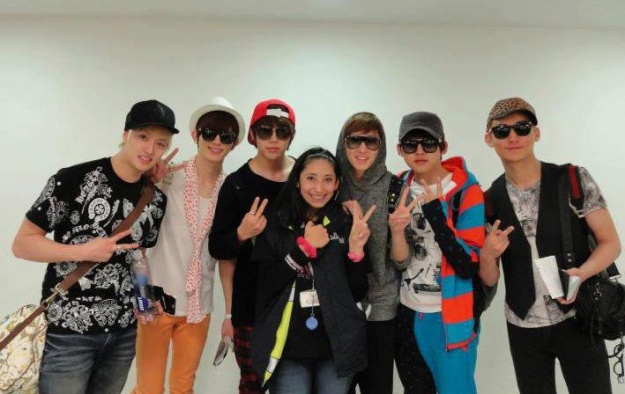 Excitement, tears and screams, were everything you could see and feel from these fans chanting over and over “Welcome to Colombia!”

For the first time ever in the country, a K-Pop artist lands in the city and creates such a massive response almost “lunatic” as some recalled it yesterday. “Who’s coming?” some travelers asked, to which a really happy fan holding a pink lantern and a Colombian flag answered: “U-KISS is coming, oh my god, U-KISS.”

These were the feelings of not just one but hundreds and hundreds of fans who gathered since early hours in the morning of May 10th after seeing Kevin Woo‘s tweet about their departure from Incheon to the airport of “El Dorado” in Bogotá, Colombia. The airport was full of fans from different cities of the country as well as fans from Venezuela, Peru and even Bolivia.

For the first time, U-KISS members felt the Latin love their fans had to offer. Once they were in customs, the boys signed some papers to some lucky fans, took a picture, and then started walking towards the exit. There they could see the huge number of fans waiting for them screaming “U-KISS!, U-KISS!” and “Welcome to Colombia!”

Security at the airport was fast and took the boys out of the airport arrival entrance as soon as possible while they were waving excitedly at their smiling fans. After saying ‘Hi,’ U-KISS got into a big and pink limo, and was escorted all the way to the hotel by police on motorcycles. Some fans said that the boys were actually overjoyed by the sight of the wonderfully warm welcome.

[The boys finally coming out of the airport :D]

[Tired but happy and smiling to the fans]

[Inside the pink limo]

Upon their arrival, U-KISS held a stage practice the next day at the Simon Bolivar park. Later that night, the boys met their excited fans at their private fan meeting. The auditorium was full of excited fans waiting to see their favorite group come on stage. Once U-KISS appeared, they started speaking Spanish and fans were beyond happy.

The night went smoothly, and the U-KISS members gave some gifts to their fans and sang two songs. Later, they promised they will comeback to hold a concert and asked for their never-ending support. Then, U-KISS left the stage as the fans from “HUG ME” and “LOOK AT ME” sections were leaving the auditorium. Only fans within the “KISS ME”area were allowed to stay.

U-KISS came on stage once again to shake hands with the fans who were left and while holding their hands, they kept saying, “Thank you, and I love you.” One lucky girl got a sweet kiss on her cheek from Kiseop since it was part of the contest they held at the very end of the hand shake event.

The boys said goodbye and finally left for their hotel, leaving sweet memories in their fans’ minds and hearts.

Stay tuned to Soompi for more updates on today’s event!

*Thank you so much to Caracol, Comunidad Hallyu en Colombia and leidyrestrepo and YamaDom9@Youtube

Kevin Woo
Kiseop
U-KISS
How does this article make you feel?