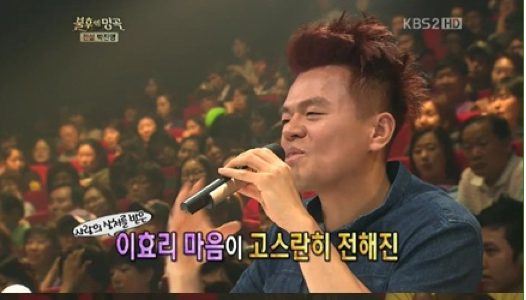 On the most recent episode of “Immortal Song 2,” J.Y. Park revealed the background story of the birth of the early 2000s hit song “Love Leaves Again” by Lee Ki Chan. This week’s episode was the first part special of the singer and producer, J.Y. Park.

After Huh Gak’s performance, JYP said, “In an audition program in the past, Huh Gak sang another song that was written by me. The Huh Gak from then and the Huh Gak now are very different. If he sang to try to impress me before, this time he was impressive because he’s made the song his own and sang confidently.”

JYP continued and said, “’Love Leaves Again’ wasn’t really written by me. I was drinking with Lee Hyori, and I wrote the song based off of Hyori’s real break up story.” He added, “Composer Bang Shi Hyuk was also there. When I told him that I wanted to sing the song, he said, ‘It’s not that good.’ However, the song was a big hit. To that, Bang Shi Hyuk said, ‘It’s because Ki Chan sang it.’”

For those of you who haven’t heard the song before, check it out below!