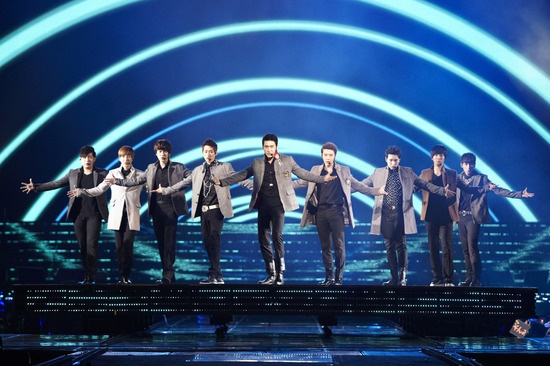 Super Junior shared their thoughts on the recent DBSK comparison and their upcoming Japanese promotions during the press conference for “Super Show 4” on May 13.

Super Junior started off by saying, “We think we benefited a lot from the Hallyu’s recent popularity.”

“A lot of people compare our popularity to DBSK’s, but in order for that to make sense, we need to work a lot harder. DBSK’s fandom is bigger than you can ever imagine. DBSK first started with small-scale concerts with only 500 seats when they first came to Japan. They worked extremely hard to work their way up and achieved the results they did,” Super Junior continued.

“We never stayed in Japan to promote and it’s not like we had official promotions in Japan, either. But we think because of K-Pop’s overall popularity, we gained a lot of fan support. In order to return the love, we are also thinking about unit groups in Japan,” they continued.

Meanwhile, Super Junior held the “Super Show 4” for two days in a row, on May 12 and 13. The concert, held twice at Tokyo Dome, sold out both shows, which brought in over 55,000 fans. Since 2007, “Super Show” has visited many different countries, including Japan, Singapore, and France, attracting more than 354,000 fans in total. They will hold an encore concert in Seoul on May 26 and 27.

Super Junior
TVXQ
Super Show 4
How does this article make you feel?