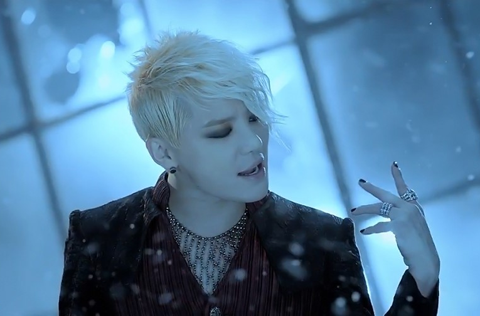 Netizens Do a Double Take over Junsu’s Latest Radical Selca

Earlier this morning, JYJ’s Junsu surprised his fans with his latest appearance. He tweeted, “HO,” and attached a photo of himself, looking very different from the Junsu fans were used to.

In the photo, Junsu sported a unique hairstyle that showcased three different colors and styles. He paid attention to every little detail, even dying his eyebrows purple and accessorizing with bold necklaces.

Netizens commented, “He’s so pretty,” “New concept for new MV? Wow,” “He looks paler…Sigh, he’s prettier than me,” “I can’t wait for his new album,” and more.

Even fellow celebrities were awed with Kim Junsu’s radical transformation. Former idol star and now musical actress, Ock Joo Hyun (Fin.K.L.) humorously tweeted, “Junsuk unnie!” to which he replied, “I decided to share this photo because a lot of people were curious about this look, especially since it appeared for only a short moment in the music video.”

Meanwhile, Junsu unveiled his music video for solo single “Tarantallegra” on May 13. He will hold his first solo concert this weekend, May 19-20, at the Jamsil Indoor Stadium in Seoul.

Junsu
JYJ
Ock Ju Hyun
Tarantallegra
How does this article make you feel?