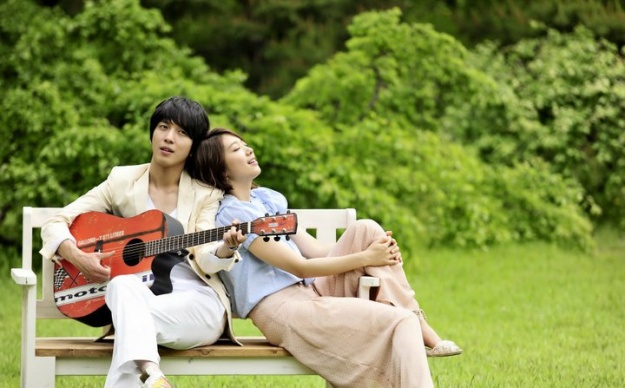 “Heartstrings,” which aired in Korea mid-2011, tells the story of college students’ dreams and aspirations towards a career in the performing arts. At the center of the drama is Lee Shin (Jung Yong Hwa), guitarist and lead singer of popular campus band, The Stupid, and Lee Kyu Won (Park Shin Hye), a student styding in the traditional music department.

The drama likewise produced a soundtrack, of which Jung Yong Hwa’s self-penned “Because I Miss You” garnered attention. In addition, Jung Yong Hwa’s real-life fellow band member in CNBlue, drummer Kang Min Hyuk is also a cast member in the drama.

Fuji TV’s decision to broadcast “Heartstrings” is boosted by fan attention and the star appeal of its leads, who have established a following through 2009’s “You’re Beautiful.” While “Heartstrings” trailed in ratings against competitors during its domestic airing, the drama has received a lot of support from worldwide fans.

Meanwhile, fans of Jung Yong Hwa can anticipate his next work when he debuts as producer for labelmate Juniel’s Korean debut album set to release in June. He also wrote the song he is producing and will feature in the track as a singer.

Park Shin Hye
Heartstrings
You're Beautiful
Juniel
How does this article make you feel?