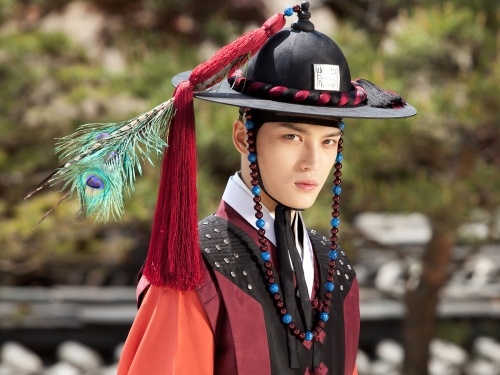 On May 16, JYJ‘s Kim Jae Joong posted on twitter, “This topknot is too tight. I feel like my forehead is going to cave in anytime soon” with a picture of himself. The revealed picture shows Kim Jae Joong at the filming set of upcoming drama “Time Slip Dr. Jin.”

Kim Jae Joong is in a traditional officer’s uniform with long hair covering his forehead, getting prepared for a topknot. While someone is tightly pulling his hair to make a topknot, Kim Jae Joon is holding on to a mesh headpiece with both of his hands with a blank facial expression.

Netizens commented, “So what would Kim Jae Joong’s officer look going to be like?” “He’s already struggling in his first historical drama,” “Where did that long hair come from? Is that real?” “Historical dramas are not easy,” and “I can’t wait for this!”