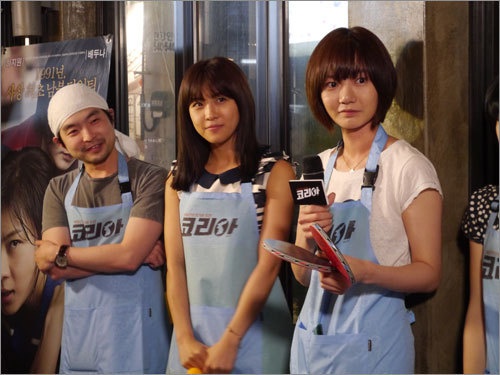 On May 15, the actors and actresses of “Korea” such as Ha Ji Won, Bae Doo Na, and Lee Jong Suk got together to serve film representatives, the press, and fans. The event was held to commemorate the film reaching 1,000,000 viewers. They wore sky blue aprons that had the word “Korea” written on them. Not only that, they also poured drinks and conversed with the individuals at the event.

Fans gathered around where the event was held to catch a glimpse of the celebrities.

So who was the individual behind this exciting event? None other than the star of the movie, Ha Ji Won! Ha Ji Won’s representatives stated, “It is difficult for actors and actresses in a film come together to serve during an event unless the main actor/actress takes action. Just as Ha Ji Won stated that they should do the event, all the other cast members quickly agreed.”

After finishing her filming for a drama, Ha Ji Won flew up from Pusan to attend the event. During the event she stated, “When you party, you have to part hard,” and throughout the night she drank with staff.

Check out the trailer of “Korea” below!