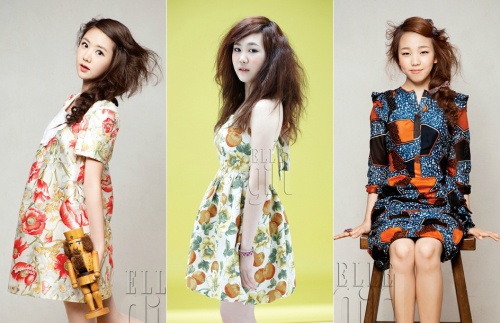 The winner of SBS“K-Pop Star,” 16-year old Park Ji Min, wore a doll like make-up and showed off various poses throughout the photoshoot, mesmerizing the production staff. In an interview during the photoshoot, Park Ji Min shared, “When they announced my name as the winner, I was so shocked that I thought they were just kidding.” In addition, she stated, “I really enjoy making people laugh and making variety of facial expressions to the point that I even dreamt of becoming a comedian. Through this experience [in “K-Pop Star” audition] I realized even more deeply that I want to become a singer but I would like to debut when I am ready to become a perfect singer.”

In addition to Park Ji Min, two of the top 10 contestants, Baek Ah Yeon and Kim Na Yoon participated in the photoshoot. Kim Na Yoon shared that she continued to watch “K-Pop Star” even after she was eliminated. She also shared, “When I lived in the dorms as one of the top 10 contestants, I tried pig feet for the first time. It is one of my happiest moments while in “K-Pop Star.”

In her interview, Baek Ah Yeon shared, “I really like the nickname ‘Steel Heart,’ that Park Jin Young gave me. After hearing that nickname, I gained more confidence.” She also shared a behind the scenes story of Park Ji Min and Lee Ha Yi. “Both Park Ji Min and Lee Ha Yi are very energetic. When we return to the dormitory after the show, I wanted to go to sleep right away but Ji Min and Ha Yi always wanted to play longer and kept me up.”

All the photos and interviews of the “K-Pop Star” girls will be featured in the June edition of “Elle Girl.”