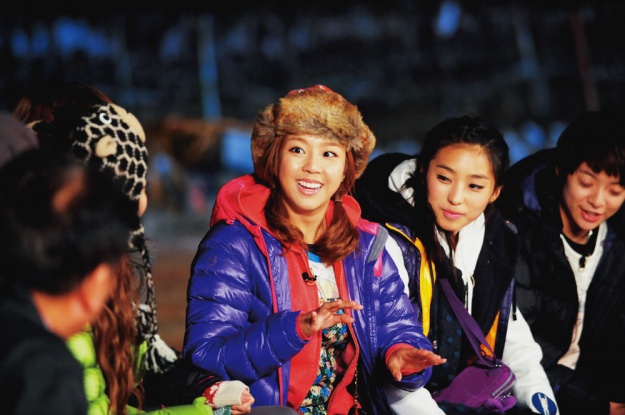 Jo Kwon of 2AM started this current “kkap” era, and now it’s become something all variety-idols must go through. “Kkap” refers to the overdramatic, exaggerated, and energetic behavior Jo Kwon has become infamous for exhibiting on variety shows. “Kkap-Kwon,” a nickname Jo Kwon is often referred to as, has recently requested for people to stop referring to him by this name, as he feels that his eight intense years of vocal training are being undermined by his strong kkap image. Does this mean it’s time to crown a new kkap-idol to continue on Jo Kwon’s kkap legacy?

He turned the “Actor/Actress-Idol Special” on “Radio Star” into the “Lee Joon Special”. “Infinity Challenge” PD, Kim Tae Ho, tweeted that the special was so funny he was crying, and that he couldn’t get himself to change the channel even though he needed to be watching soccer. Many PDs and screenwriters, as well as Yoon Jong Shin, Haha, and Park Jae Beom, have also complimented Lee Joon’s comic ability. He’s received a lot of negative comments any idol would be sensitive to, such as “Lee Joon is ignorant,” “MBLAQ’s popularity is falling compared to BEAST and Infinite,” and “he’s dirty because he doesn’t wash often”. He’s taken to such criticism with tact, showing his innocence while simultaneously elevating his image.
The Verdict? He is a top contender in overthrowing Jo Kwon for the title of “King of Kkap”. However, he’s personally declared that he sees himself as an amateur in comparison to Jo Kwon’s professional kkap-status. Despite what he’s said, he’s quickly emerging as one of the top variety-idols after his appearance on “Radio Star”.

“He’s a really fun friend, but was funny without intending to be. He was just ignorant.”
– said Kim Gu Ra

Min is known for her kkap-dances. When asked on “Extreme Lodging” whether Kkap-Kwon or Kkap-Min had a higher level of kkap, she confidently stated that if she used her face in her kkap-routines, she would be the winner. Jo Kwon uses exaggerated facial expressions to make his kkap-behavior funnier, while Min has been limited to using kkap in dances in order to maintain her girl-idol status. Her charm lies in her confident, witty, and eccentric manner.
The Verdict? Jo Kwon is Min’s senior by one year, and they’ve become friends over the seven years they trained together. They’ve built up a kkap-synergy, and Jo Kwon has stated that “Min is the best in girl’s kkap-dancing”.

“I’m always embarrassed when I’m with Min. She automatically starts dancing when she hears music. Isn’t dancing to Beyoncé in the middle of the street overdoing it? I would like for her to stop doing things that attract attention when I’m out with her.”
– said Girls’ Generation’s Hyoyeon

ZE:A’s Kwang Hee: Spotted with kkap behavior on SBS’s “Strong Heart” and “Rules of the Jungle“

Kwang Hee’s tone of voice and manner of speech give him a distinctive kkap quality. He insulted Jewelry’s Ye Won on “Strong Heart” by calling her a “fat and ugly child” and telling her that she “needs to lose weight”. When the audience began to boo at his remarks, he stated that there’s a mutual understanding among variety show guests and asked the audience not to misunderstand him, which drew laughter from the crowd. He continued on to say “I received one million won from the president of my agency for being funny on variety shows,” which caused the audience to erupt in laughter once more.

“Kwang Hee is the embodiment of jealousy, so had this happened while he was a trainee or in the early days of his debut, he would have gone crazy. These days, he may still get envious inside his head, but he seems to process it in his heart. After receiving recognition on variety shows, he now even tells me, “I’m glad you did well’. However, he often still glares at me for no reason.”
– said ZE:A’s Im Si Wan

Meng Sechang’s sexy waves and erratic movements make up his signature kkap-dance. On the show “Come to Play,” he perfectly exhibited his kkap by performing a sexy dance to Sistar’s “So Cool” with a playful expression. He doesn’t limit himself to just dances for kkap, but is also capable of intelligent kkap as well. Even though he can count the number of books he’s read with the fingers of his hands, he’s always received high scores on foreign language exams. The secret, he says, is because he’s had to read so many scripts. He also did extremely well on KBS 1’s “Quiz Korea,” adding credibility to his intelligent kkap.
The Verdict? It seems Jo Kwon needs to watch out for Meng Sechang before he starts worrying about Infinite’s Sungjong. Meng Sechang is quickly becoming one of his fiercest competitors.

A mixture of jokes, a tendency to expose other celebrities, and a certain cute quality add to her kkap appeal. She’s exposed Girls’ Generation’s Sunny’s drinking habits, saying she “only drinks so-maek” (soju and beer), and making a joke by giving Sunny an alcohol related nickname. When Ye Won appears on variety shows, the atmosphere gets lighter and the mood, brighter. She has a spontaneous personality and adapts quickly to new situations, giving her a good foundation for variety-idol status. She’s modest in her variety show personality, and thus well received as a permanent cast member on variety shows. What she lacks right now is the ability to stir up searches on popular internet search sites.
The Verdict? She’s shown her refreshing personality through her radio show she co-hosts with Kwang Hee, SBS Power FM’s “Kwang Hee and Ye Won’s Young Street”. The pair feed off of each other’s kkap, and therefore has been a great source for it.