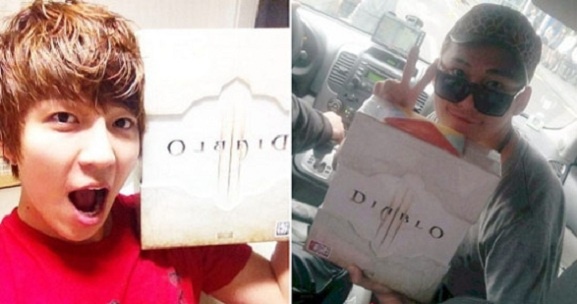 U-Kiss members are being criticized for their tweets regarding Diablo 3. Recently on twitter, many of the U-Kiss members wrote that they wanted to get copies of Diablo 3. On May 14, Soohyun wrote, “”Once I get to Korea I am going to buy a computer. For Diablo.” Then he wrote, “Is it hard to get a limited version?”

He continued, “I am at New York… Diablo 3 Limited Edition TT.” When another member received a copy from a fan he tweeted his envy. Eventually on May 17 Soohyun received a copy and tweeted, “Finally! Thank You!”

The same went for the member AJ who continued to write about Diablo 3 until he actually received it from a fan. Kim Hyung Joon of SS501 also tweeted something similar on May 15.

Netizens wrote, “It seems like they are directly asking fans to buy them copies,” “At first I didn’t mind much, but it doesn’t look good as they keep asking for Diablo 3,” and “I don’t think it is right that idols are using their popularity this way.”

AJ
U-KISS
Diablo 3
How does this article make you feel?