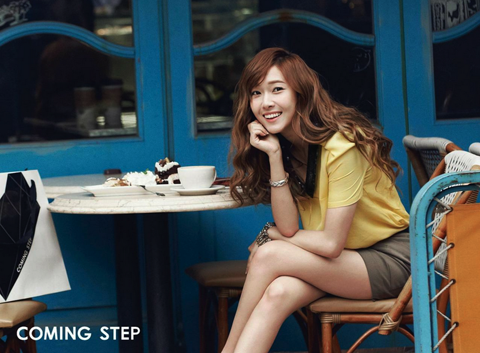 Girls’ Generation’s Jessica guested on yesterday’s episode of tvN’s “Taxi,” marking her first solo variety show appearance since her debut. Dressed in a beautiful hot pink blouse, she broke her ice princess image and replaced it with a cute, bubbly girl.

During the episode, Jessica revealed her true feelings about her nickname and image as “ice princess.” She started, “I don’t really like talking about it much. I can’t seem to get it straight myself. That’s why I felt uncomfortable appearing in variety shows.” Jessica continued, “I’m frequently described as ‘chic,’ but I think people say that based on my appearance only. Some people also say that I’m a heodang (term used to describe someone who seems perfect, but actually isn’t; can also mean clumsy and clueless). A lot of people think I don’t have any concerns or worries, but that’s not it. I actually think about them a lot.”

Jessica also showed off her aegyo, adorably saying “Ah ing~~” whenever she was embarrassed or nervous. Meanwhile, Super Junior’s Sungmin and f(x)’s Luna made surprise guest appearances on the show.

Girls' Generation
Jessica
Taxi
Wild Romance
How does this article make you feel?