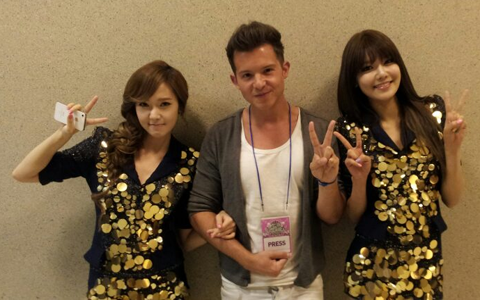 As previously reported, American actor/singer/songwriter Simon Curtis revealed that he was blown away with Girls’ Generation’s Sooyoung last February. On May 21, he shared a photo of himself posing with Sooyoung and Jessica backstage at the “SMTOWN LIVE WORLD TOUR III in LOS ANGELES”.

Simon attended the concert and tweeted several photos from the press conference and backstage, showing off his affection for Sooyoung. He wrote, “Finally got to meet my beloved Sooyoung (& Jessica, who’s now tied for my fav). Love them <3.” Simon also gave live updates from the successful LA concert and chatted with fellow K-Pop fans via Twitter.

Additionally, he confessed that he was taken away with Jessica, commenting, “Jessica kinda stole my heart tonight though…she was so lovely and so kind. Sigh <3.” Several hours ago, the American entertainer also complimented Sooyoung’s English while tweeting with a fellow Girls’ Generation fan, writing, “Sooyoung can speak English really well too actually!”