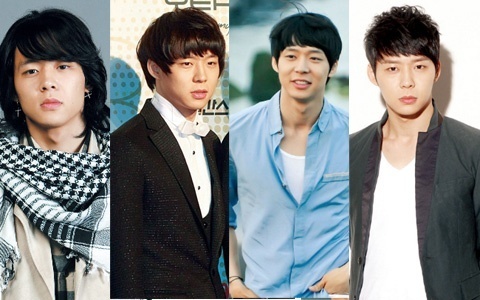 Since his debut in 2003, singer-actor Park Yoo Chun (JYJ, formerly DBSK) has made numerous hairstyle changes. From buzz to unbalanced to dandy styles, Park Yoo Chun has tried it all. In fact, devoted fans may even recognize what year the photo was taken based on his hairstyle. Hair stylist Kang Ho commented, “He has a pretty head, one that isn’t too angular nor round, making it possible for him to try different styles. He can style it any way he wants to depending on his album or character concept.”

2006
In 2006, Park Yoo Chun tried the wolf cut, letting the ends naturally curl from his shoulders. His side swept bangs were the finishing detail to his feminine, yet manly look.

2008
Park Yoo Chun went for an edgier look, purposely cutting his bangs in an unbalanced fashion. He also added some brown highlights to lighten up his hair color.

2010
For his warm and kind character in “Miss Ripley,” Park Yoo Chun went for the bowl cut, making him appear well groomed, boyish and young.

2012
To portray the adorable, gentle, yet firm time-traveling prince in “Rooftop Prince,” Park Yoo Chun softened his hairstyle with some gentle curls. He let his bangs fall gently to the side of his face, sometimes adding character to his look by styling his bangs upwards.