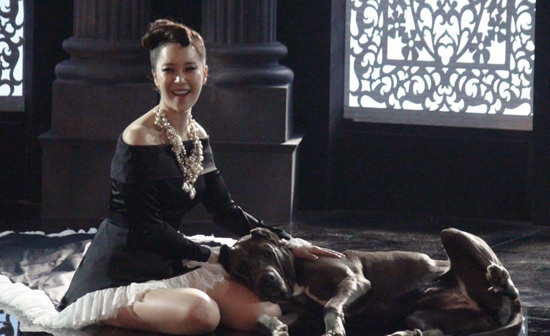 The Korean Men’s Association is at it once again by filing a petition to ban Baek Ji Young’s newest track, “Good Boy” from being circulated. They claim that the lyrics in the song are degrading to men. This isn’t their first time filing a petition against a mainstream work as they have tried to get the film “You’re My Pet” out of the theaters in the past.

The Korean Men’s Association claim that Baek Ji Young’s “Good Boy” has a theme of an older woman dominating a younger man and it is degrading because it makes it seem like a relationship between a dog and its owner. They requested for a ban of circulation.

They continued to say, “The song expressed a man going against a woman’s wishes as ‘barking about,’ or ‘biting his owner.’ The music video actually has dogs in it, as if it is trying to tell the audience that men should be tamed and trained like dogs.”

Part of the lyrics from “Good Boy” entail, “Aren’t you past puberty? This is so immature. Stop barking about / You’re like a piece of ice under my feet, I’m getting tired of this now / Huh… I treat you well and this is how you repay your master?”

Regarding this, the Korean Men’s Association stated, “Men might have that fantasy of dating older women but normal, healthy men will definitely feel serious discomfort at this song.”

Many K-Pop fans are expressing diverse feelings about this issue. One netizen stated, “Songs these days have very blunt and straight-forward lyrics. So rather than derogatory lyrics, I think the song is too blunt and impulsive.” Another netizen said, “You need to listen to music as music. This isn’t degrading men but it’s about some people who are in a special situation. I think you are being overly sensitive.” Another netizen added, “It’s just mainstream K-Pop. Is there really a need for a ban of circulation?”

But there were some who felt otherwise. One netizen expressed, “Try thinking it the other way around. If a song or an advertisement contained derogatory themes toward women, this problem would have risen as well. Maybe the intention wasn’t there but if you break apart the lyrics, you can definitely say it is degrading to men. If it is received as degrading and uncomfortable, the makers of the song must apologize.”

Here are the lyrics to Baek Ji Young’s “Good Boy” and check out her music video below:

Baek Ji Young
How does this article make you feel?